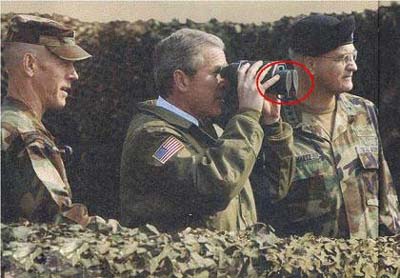 Ah, excuse me, Mr. President, but you
might want to remove the lens caps first.*

*Unlike some partisan websites that use photos of this nature (see also "Why Georgie can't read") to demean President Bush's intelligence, Real News 24/7 carry them in a spirit of fun and without malicious intent. Snopes.com, a website that discusses and debunks urban legends, has a feature on how Republican jokes about Bill Clinton also included a binoculars photo, proving that no one political party has a monopoly on this sort of humor.