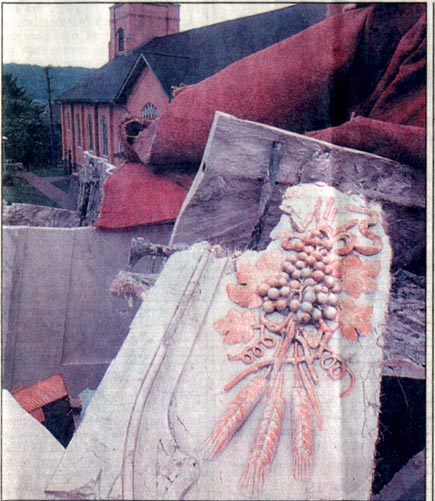 Part of an altar removed from St. John the Baptist Roman Catholic
Church in Northern Cambria lies in a dumpster.

The destruction of beautiful churches has been but one of the devastating results of the  post-Vatican II era.   High altars, statues, altar rails, and other beautiful ornamentation, are  believed, by some,  to be outmoded and unnecessary in light of the new reforms.  The deception and manipulation of the devoted faithful by certain "experts" follows a numbingly familiar pattern.  Construction teams are called in late at night while people are unsuspecting.  It is insisted that the 100 year old altars were "unnecessary duplications", and a local church that prides itself on "welcoming, compassion, and openness" shuts its ears to the cries of the faithful as their sacred heritage is destroyed.

If a liturgical rite that was used for nearly 1400 years was nearly abolished, some of this comes as little surprise since there will be little sensitivity shown towards the sacred architecture of the churches built for the ancient liturgy.

The faithful of St. John's parish, who fought against these destructive actions, are to be commended for their courage and devotion.  May their cries echo throughout the church as a warning and an appeal to all - so that we might be able to preserve the sacred Catholic spiritual and artistic heritage for future generations.

(the following is an excerpt from a news report)
NORTHERN CAMBRIA - PENNSYLVANIA, USA  Parishioners of St. John the Baptist Roman Catholic Church feel betrayed by what some term a desecration after the church’s nearly century-old altar was ripped out, broken apart and tossed into a Dumpster.

Diocese officials are embroiled in the consolidation of six churches into a new Prince of Peace parish with two churches, the current St. John and four other churches will be closed.

"It is desecration, not only of a holy object, but also a desecration of our feelings because this focus of the practice of our faith has been so cavalierly destroyed despite our objections," said parishioner Monica Wadium. The Philadelphia Avenue resident traces her family membership in the church to her grandparents.

But the Rev. Gerard Connolly, who serves as parish priest at St. John, 811 Chestnut Ave., and Our Lady of Mount Carmel, defended the destruction of the altar that, one expert says, would cost $15,000 to $50,000 to replace.

Connolly said the altar stone, a sacred object was removed and put in storage before the altar, a mixture of horsehair reinforced wjth steel, was discarded.

The altar was to be taken to a landfill and buried. The Two devotional altars also were dismantled and discarded, Connolly said.

"What is the reason for renovating St. John?" Wadium asked. "There is no church law, or even directive, that states our altar had to be destroyed. It was an integral part of our cburch architecture and the pride and joy of our community."

Michael Rose, author of "The Renovation Manipulation," a book written to help congregations stop cosmetic changes, said they often are done at the whim of Catholic heirarchy and not always necessary.

"It was priceless to the community," he said about the altar during a telephone interview from his office in Cincinnati.

"I have seen pictures of it and can tell you it was a major work of art."

Wadium said the altar was put in when the church was built in 1903. She said the immigrant families were poverty-stricken but filled with faith and struggled to make the altar the central focal point of St. John.

Rose said he was outraged the bishop in Altoona-Johnstown Roman Catholic Diocese allowed the removal. He said the bishop is charged with protecting the sacred patrimony of the church, its physical heritage.

But Connolly said the altar had not been updated since Vatican II, a meeting of bishops in Rome during the mid-1960s. He said it was a necessary change.

More than a dozen St. John parishioners feel betrayed by Connolly and the diocesan bishop, the Most Rev. Joseph Adamec.

Joe Minarish Jr. joined Wadium and other churchgoers in expressing shock and outrage.

But, said Minarish, others have been afraid to speak for fear of retribution from church officials.

"They’re afraid they will be excommunicated or refused for burial in a Catholic cemetery," he said.

He said he believed the other 90 percent of parishioners are unhappy with the renovations and have been afraid to say anything until now.

Wadium and Minarish said the real sin is the secret manner in which the renovation was decided.

"The plans for renovation have been withheld from the parishioners, so that it was impossible to prevail upon the pastor and the bishop to consider an alternative," Benamati said in the letter.

Wadium, Minarish, Biros and another dissenter, Ed Kerchesky, said their requests for information from committee members and the priest went unanswered.

"One member of the committee told us be was sworn to secrecy," Kerchesky said. "We asked Father (Connolly) to inform us in the church bulletin, but he never did."

Church member Robert Benamati was chosen by the group to write a letter to Rome outlining their discontent. It said that, "Connolly and the bishop acted in a decptive manner to needlessly diminish the temporal goods of the parish."

The plans for renovation have been withheld from the parishioners, so that it was impossible to prevail upon the pastor and the bishop to consider an alternative," Benamati said in the letter.

But the decendents of the people who founded St. John, the core group of dissenters, do not believe they are wrong.

A parishioner from Mount Carmel who spoke on condition of anonymity, said he did not believe the merger is necessary. He said theshortage of priests could be corrected by bringing in others from side the area.

Calling this a "defining moment for church leaders, the elder spoke against blanket acquisition.

"Mergers by themselves are not good," he said as he talked about consolidation wave sweeping the business world. "People lose identity and become like furniture to the powers that be."

Like a thieves in the night After five years of deception and lies by leaders of the Altoona-Johnstown Roman Catholic Diocese, our worst fears became reality. On May 27 around 4 p.m., destruction of our sanctuary began at St. John the Baptist Roman Catholic Church, Northern Cambria.

Two contractors from C.E. Wood of Altoona appeared out of nowhere.

We-— Joseph Minarish, Helen Biros, Edward Kerchesky and Carol Benamati — parishioners stood there in disbelief at the sight of two workmen in steel-toed boots standing on our beautiful sacred altar. They were ripping, tearing and smashing at our nearly 100-year-old main altar with crowbars, sledge hammers and electric saws.

Alongside stood our parish priest, Rev. Gerard Comielly, TOR, looking on in approval. Gerard asked us to leave. We returned later with other parishioners equally upset at the destruction. Once again, Gerard demanded that we leave or he would call the police. We left.

Gerard went against his word. After leaving the premises of the church, we were standing on Elizabeth Street and the police arrived. The officer informed us that, upon orders from Gerard, we are not permitted to enter the body of the church.

Is Gerard so ashamed of what he is letting the contractors do to the sanctuary of our church that he did not want anyone else to see? The contractors appeared over and over again, in the early morning hours, late evening and after dark, when they were least expected.

The saddest of all is the way our altar was disposed. For over a week, the remains of our consecrated altar lay in a dumpster along with a bag of garbage and two old tires.

Our sanctuary has now been destroyed and can never be replaced. Like thieves in the night, they came, they destroyed and they left.