No matter what side you're on, John Kerry is on your side!

Gee, do you really think doing this photo op will help me appear more presidential? 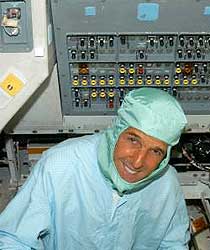 More political humor below and on

THE LIGHTER SIDE OF ELECTIONS

at our sister site, www.votefraud.org

Yeah, but what's with that glove?

Okay, say what you will about the King of Pop, but there's one thing about Michael Jackson that you must admit… 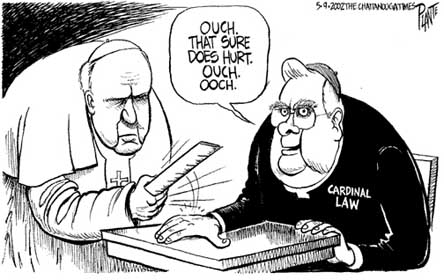 (Okay, so Law resigned (and resurfaced in Rome, with a cushy new position), but you can substitute Cardinal Mahony, Hans Küng,
or the clerical malefactor of your choice, and it's still funny…and painfully true.

1. You believe that the AIDS virus is spread by a lack of federal funding.

2. You believe that the same teacher who can't teach 4th graders how to read is somehow qualified to teach those same kids about sex.

4. You believe that there was no art before federal funding.

5. You believe that global temperatures are less affected by cyclical, documented changes in the earth's climate, and more affected by liberal yuppies driving SUV's.

6. You believe that gender roles are artificial, but being homosexual is natural.

7. You're against capital punishment, but in favor of abortion-on-demand.

8. You believe that businesses create oppression and governments create prosperity.

9. You believe that hunters don't care about nature, but loony activists who've never been outside of Seattle do.

10. You believe that self-esteem is more important that actually doing something to earn it.

11. You believe that the military, not corrupt politicians, start wars.

13. You believe that taxes are too low, but ATM fees are too high.

15. You believe that standardized tests are racist, but racial quotas and set-asides aren't.

16. You believe that Hillary Clinton is really a lady.

17. You believe that the only reason socialism hasn't worked anywhere it's been tried is because the right people haven't been in charge.

18. You believe conservatives telling the truth belong in jail, but a liar and sex-offender belongs in the White House.

19. You believe that homosexual parades displaying drag, transvestites, and bestiality should be constitutionally protected and manger scenes at Christmas should be illegal.

20. You believe that illegal Democratic funding by the Chinese Communists is somehow in the best interest of the United States.

Do you ever question whether Americans really need to sacrifice more liberties in pursuit of security?  Do you think invading Iraq maybe wasn't such a good idea? Are you perplexed that Saddam Hussein's Weapons of Mass Destruction still haven't been found?

Well, worry no more!  Now you can banish these and and a hundred other nagging questions about 9/11 and the War on Terrorism from your mind once and for all with…

Give a man a fish

Give a man a fish and he will eat for a day.

Teach a man to fish and he will go out and buy expensive fishing equipment, stupid looking clothes, a sports utility vehicle, travel 1000 miles to the "hottest" fishing spot, and stand waist deep in cold water just so he can outsmart a fish. (Average cost per fish: $395.68)

Breaking news from the Middle East

My six-year-old grandson called his mother from his friend Charlie's house and confessed he had broken a lamp when he threw a football in their living room.

"But, Mom," he said, brightening, "you don't have to worry about buying another one. Charlie's mother said it was irreplaceable."

The Commander in Chief looks out for our nation's interests

It is vital that the President be a man of great vision.

Making the computer user-friendly for the Jeff Foxworthy crowd.

A lady was visiting a church one Sunday. The sermon seemed to go on forever, and many in the congregation fell asleep.

After the service, to be social, she walked up to a very sleepy looking gentleman, extended her hand in greeting, and said, "Hello, I'm Gladys Dunn."

On the pitfalls of English as a second language

"I'm prescribing these pills for you," said the doctor to the overweight patient, who tipped the scales at about three hundred pounds. "I don't want you to swallow them. Just spill them on the floor twice a day and pick them up, one at a time...."

Coming soon to a Gulf Theater of Operations near you

The Bible tells me so?

"Our bombs are smarter than the average high school student. At least they can find Afghanistan."

8. "Containers are labeled in some crazy language"

7. "They must have been stolen by some of them evil X-Men mutants"

6. "Did I say Iraq has weapons of mass destruction? I meant they have goats"

5. "How are we supposed to find weapons of mass destruction when we can't even find Cheney?"

4. "Still messed up because of Daylight Savings Time"

3. "When you're trying to find something, it's always in the last place you look, am I right, people?"

From our "Stupid but True" Department

Police in had good luck with a robbery suspect who just couldn't control himself during a lineup. When detectives asked each man in the lineup to repeat the words, "Give me all your money or I'll shoot," the man shouted, "That's not what I said!" 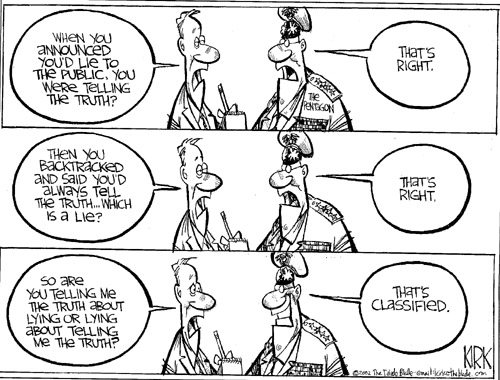 Advice for the day

If you have a lot of tension and you get a headache, do what it says on the aspirin bottle: "Take two aspirin" and "Keep away from children."