With arrest in Michigan, are Nazi
hunters finally beginning to run out of work?
Somewhere, Simon Wiesenthal is celebrating the news, but for how long?

Concentration camp guard suspect nabbed by FBI "Federal immigration agents Wednesday arrested a 77-year-old man, once featured on "America's Most Wanted," who they say had been an SS guard in a Nazi concentration camp during World War II, and a fugitive for 16 years." Johann Leprich (right) contends that he was coerced into joining the SS and never took part in or was aware of any war crimes taking place at the camp. Acquaintances of suspected Nazi say he deserves chance to explain "Leprich's application for U.S. citizenship said he served in the Hungarian Army during the war but did not mention Mauthausen. After officials learned he was a guard there, Leprich acknowledged lying on the application. Former Nazis are ineligible for U.S. citizenship."  More on the arrest

Leprich isn't the only man accused of having been a Nazi guard to appear in the news this year.

Michael Seifert (left), 79, face extradition in British Columbia after he was found guilty in absentia in Italy of torturing and murdering people in a Verona camp. Last month, according to a Toronto Star article, "[Seifert's] lawyer Doug Christie told B.C. Supreme Court his client's rights were breached under Canada's Charter of Rights and Freedoms because Italy held the trial and reached a verdict without the accused being there." (Convicted murderer challenges extradition) Christie says that Seifert denies the charges, he is now mentally impaired and unfit to stand trial.  For an in-depth look at the Seifert case, see the CBC's The Beast of Bolzano. 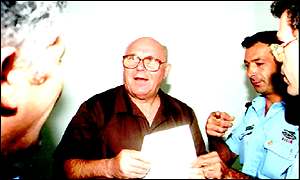 Joining Leprich and Seifert as a candidate for extradition, is 83-year-old John Demjanjuk (right, center—see the Department of Justice's document). The Demjanjuk affair is significant because he has continued to be hounded despite having been acquitted in Israel ten years ago (see Israeli Supreme Court documents). The case against him was thrown out, in part, due to forged documents.

These cases underscore a dilemma for Nazi hunters: The potential pool of alleged criminals is dwindling—rapidly. Demjanjuk, Leprich and Seifert are all over 75 years old, which means they would all have had to be in their late teens or twenties at the time they're said to have been engaged in nefarious activities. What, then, will the Holocaust Industry do when these and other suspected ex-Nazis die out? Start looking men who were twelve-year-old guards? Or perhaps it will attempt to extort money from widows, children and grandchildren of Hitler's henchmen? Maybe move from there to making life unbearable for extended families?

But these are no idle questions; few things have kept the issue fresh for the younger generations than to have living specters of the grim past paraded before them on the evening news. Soon those specters will disappear forever. And if the prey has grayed, so has the hunter: Simon Wiesenthal (left) is now 94 and it remains to be seen what kind of enthusiasm will be left after he's gone. While the general public wants to see justice served (when, indeed, it is justice), there is a growing perception that Jewish survivors have been amply compensated (although authors such as Norman Finkelstein. in The Holocaust Industry, dispute this, saying that most of the money never gets past the corporate offices of "Holocaust" groups) and that the saturation point has long ago been reached as regards the blizzard of books, articles, films, TV programs, etc., featuring a "Holocaust" theme. So, the "Holocaust" debate will enter a new era, one, it is to be hoped, where legitimate issues finally can be raised without the shrill accusations of "anti-Semite" or "self-hating Jew" drowning out rational discourse.